I consider myself a glass half full drinking, bright side looking, silver lining finding kind of girl. At all costs, I try to avoid negativity, drama, the haters, and the soda drinkers (another post). I am trying to teach my children to be this way too. The world could definitely use more positive people.

But there is always negative energy that one needs to channel and for this I have my HATE TRIFECTA. We spend so much time trying to appear agreeable that sometimes it’s fun to be a hater. Below some frequently asked questions to help you better understand the wonder and the satisfaction that is the HATE TRIFECTA:What is a HATE TRIFECTA?

A HATE TRIFECTA is three things that are uniquely hated by a single person. Others may hate one or two of the items, but probably not all three. It’s almost like a fingerprint. I avoid these things at all costs. Whenever one of these things comes up in conversation, I mention that it is on my HATE TRIFECTA.  I find that people — especially women — want a HATE TRIFECTA of their very own.

What’s in a HATE TRIFECTA?

A HATE TRIFECTA is unique to you. And many of you know immediately what the three things in your own HATE TRIFECTA are. My HATE TRIFECTA consists of three distinct items: vollyeball, olives and Robert Downey, Jr.

Why these things?  How do I find my HATE TRIFECTA? Haven’t you seen Sherlock Holmes?  And I think I might have an olive you would like.

So many questions. Some of you need guidelines on how to figure out your own individual authentic HATE TRIFECTA. So, I use my own as a guide.  I didn’t plan it this way, but as I analyze it seems my items fit into categories that I think may be helpful as a blueprint as you craft your own HATE TRIFECTA

The obvious-volleyball: If you know me, you know that I shun sports at all costs.  I’m not a team player by any means. Many a friend has try to entice me into playing softball with her, but I have never succumbed.  If a ball comes towards me on a playground, I will scream and turn the other way. If you want me to throw something, say keys, at you I will walk them over and remind you that I don’t like throwing things. I hate volleyball specifically because it reminds me of being the new girl in 6th grade who moved to the suburbs after never even having gym class in the city. It reminds me of being humiliated when I had to serve the ball that very first time and having to play the same stupid sport for several months every year for the next seven years. It reminds me of all the assholes I went to high school with specifically one named Ed who always happened to be in my gym class.  You know that room in George Orwell’s 1984 where the thing you are most afraid of happens? If that really exists and I visit it I will have to serve a volleyball again and again and again.

If I close my eyes I can clearly remember when the whistle blew that ended the last gym class I would ever have to play volleyball my senior year. That was bliss.

The surprising -olives. I am what many would call a foodie. I’m told the current politically correct term is food person. But by any name, I like to eat.  And eat well. I know how to put a cheese plate together. I spent a year sampling the best pork dishes in NYC. I have been known to drive my family quite far off course just because I read that something “was good” at some hole in the wall in the middle of nowhere.  This is why NO ONE believes I don’t like olives. I come from an Italian American family. I was raised in a Greek non volleyball playing neighborhood. I lived in Italy. I spend time with many other food people. When I mention I don’t like olives, I am first met with disbelief and then, without fail, I am told that there is this one type of olive I just have to try.  At first I tried all of them.  I indulged everyone.  But you know what? To me all olives taste the same. Yucky.  Really no one has an olive that I like. Trust me it doesn’t exist and please stop offering. The same goes for tapenade. No thank you.

And ever notice how olives sneak onto things and hide?  Sometimes you order a plain pizza and there is a random half olive stuck on a piece.  And try picking them out of a greek salad. Impossible.

The frivolous/celebrity –Robert Downey, Jr. This is the one that’s most easy for people to pick. It’s usually Renee Zellwegger. Maybe Dakota Fanning. Some say that chick from Knocked Up. I say why hate the women all the time?  For me it’s clearly Robert Downey, Jr. I know, I know. Iron Man. Yes, there was Oscar buzz for Chaplin.  But really it wasn’t so long ago that this guy was waking up his neighbors in their beds when he was super strung out?  How many chances have we given this RD Jr.? Is it really worth it? Didn’t any of you see his awful overwrought Elton Johnesque musical performance on Regis and Kelly many years back? How about the Golden Globe award speech he gave when he won for Ally MacBeal of all things? He thinks he’s such an acTOR. Awful. I just can’t.  He is the worst.

What happens when your HATE TRIFECTA fails you?

Unimaginable, I say. Or would have said before the baby incident.

Oh, the baby incident took me by surprise.  Friends of mine were having breakfast with their one-year-old in LA when the Robert Downey, Jr walked in.  Dadfriend went over and asked Bob if he would take a picture with his daughter who “loved Iron Man”. Junior agreed and then even when he saw how old she was and that she had most likely never seen any movie that wasn’t Baby Einstein, he STILL took the picture. Now, I have seen said picture and it is adorable. I am no match for the cuteness.  Much like the Grinch felt when he heard the Whos of Whoville singing, something changed in me immediately.  My heart grew.

I guess the thing is I respect when celebrities want their privacy. You hear those stories about how some big actor was a dick because he didn’t want to sign an autograph or some singer just wanted to have her slice of olive pizza and not make eye contact.  I ALWAYS side with the celebrity. These people owe us nothing but entertainment.  They don’t want to talk to your Grandma Helen in Oradell on your cell phone. So the fact that Mr. Downey, Jr was so cool about it and the picture is so strange and wonderful with adorable babe and well tanned man makes it almost impossible for me to still hate him.  Believe me, I have tried.  HARD. I just can’t hate Robert Downey, Jr. anymore.

So, now I have this void.  What is a trifecta without three?  Where do I put the negative energies?  Do I try that olive you think I would like?  No, that’s crazy talk.  Have we learned nothing? The HATE TRIFECTA is necessary.  Jamie Foxx, it’s all on you now. I’ve got not real reasons, you just annoy me. But I shall build a case and report back soon. 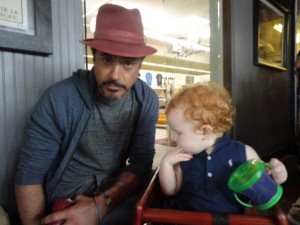 5 Responses to THE HATE TRIFECTA